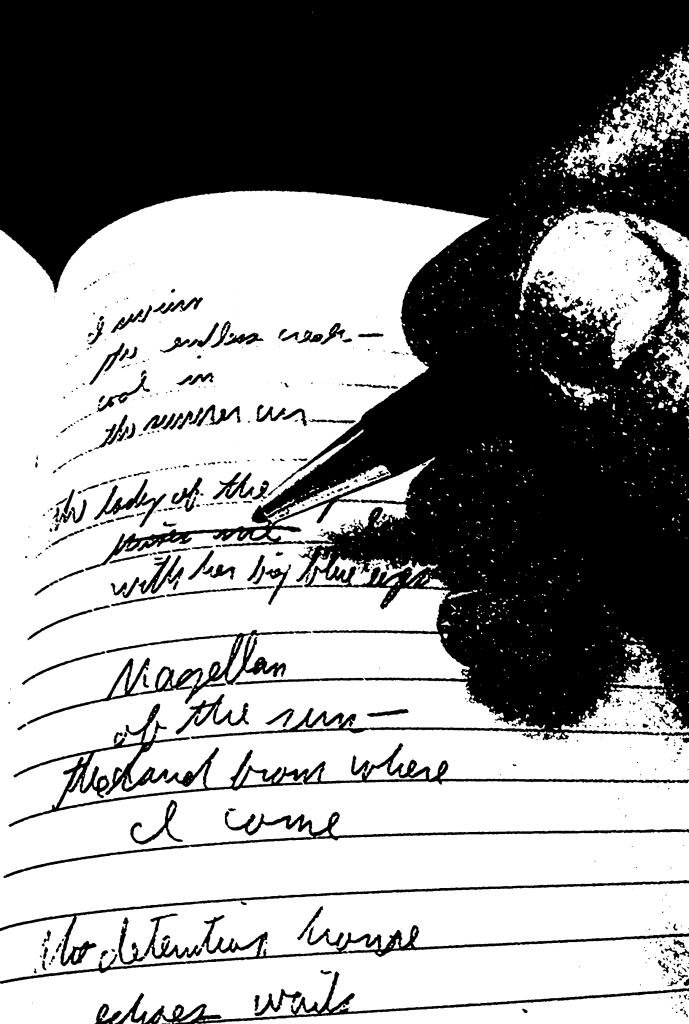 Laura Lovic-Lindsay writes under the username “frithar” on Poetry Nook and has published many good poems that went on to win both the main prize and honorable mentions. She has also been featured in various literary publications, such as Loyalhanna Review, Young Ravens Literary Review, Time of Singing, Poppy Road Review, and others.

What is your background?

I took an English degree at Penn State, 1993. But my focus was literary analysis, not creative writing. I was quite convinced I couldn't write. I gave a few half-hearted tries, but got nowhere.

It probably didn't help that I have a younger brother who was writing since he was nine or so. He grew in leaps and bounds--poetry, songwriting. Who would want to be compared to that?

It was his prodding that led to my writing. Again and again, he insisted I should write something. I was getting really annoyed with him. Finally I said, "Fine! I'm going to write a book and you'll see what rubbish it is, and you'll have to leave me alone!"

I started making lists of elements I loved seeing in stories. Lists and lists. It made me so happy just to read through those lists! Gradually, I began to imagine a young boy working with these images, conflicts. I began the novel. And I fell in love with writing.

What happened with the novel you were writing?

Funny you should ask...

So, I fell in love with my novel and got up to about chapter twenty before panic set in. I realized I truly knew nothing about writing--the craft of it--so I took time off to join writers' groups and read books on writing. I turned, instead, to short stories. Makes sense to hone your craft by working out smaller bits, yes? I fell in love with that, too!

I've been entering contests with my pieces and submitting them to regular publishing opportunities, too. I've had a wonderful lucky summer! I won Gemini Magazine's short story contest with "Small Onya." My piece "Churn" won Brilliant Flash Fiction's recent contest. And then the wonderful people at Poetry Nook have kindly celebrated several of my poems. It's really been quite a year!

Do you refer back to the lists and notes you create in coming up with new story ideas or poem ideas? Or is it more the process itself that you enjoy and find beneficial?

Sometimes I refer back to those element lists. They were filled with ideas like: secret bridges no one else can see, mirrors that contain strange worlds, trees that open up, toadstools, moss, hidden houses, staircases where they don't belong... Yep, all good and useful stuff. I like the Uncanny, the numinous. Old notebooks make for a beautiful harvest.

What is the background of your winning poem, “Blue Moon River Walk?” Was it based on a personal experience or was it something purely driven by inspiration?

I have a "thing" for the moon. When my children were very young, I took them on lantern walks at night--easily done because we home educated. No one had to get to sleep early for school. We walked miles at night, every chance we got. Spring, summer, autumn. We walked through cemeteries, lanterns swinging, telling stories. We walked to the river (we are lucky enough to live along the Allegheny River), up to the woods, through every neighborhood in our tiny town.

My kids are now grown. The lanterns have been packed away for camping, but we still walk at night. There's magic in a sleeping town. I'm blessed to know my kids still feel it!

I found it interesting that you home educated your kids, because I was partially home educated as well. In my case, it was completely unstructured and I just read whatever interested me. What have you found to be the pros and cons? Do you find that home education encourages more creativity and individual thought or that develops regardless, depending on the individual?

We did traditional home education for about the first eight years, then moved toward a more student-specific structure. My daughter was very literary. She's probably my sharpest, most accurate editor. Her critique is always spot on. My son was more science-minded. He's been obsessed with physics, electronics. I couldn't help much with that, so he was an auto-didact there.

You asked about pros and cons. There are so many of each. Too many for a brief answer. I'll pick one of each.

A con: the kids weren't glutted with a variety of things. What if my son would have enjoyed working on a yearbook staff? Or my daughter might have thrived at debate? But those chances didn't come.

A pro: both of my kids are extremely intelligent (far more than poor old mum). They became their own people. Pursued their own paths. They walked away from what they were taught and began to, instead, teach themselves and pursue knowledge in their own way. Priceless, that.

How much a role does real life versus fiction play in the development of your poetry? How closely do you identify with the narrator of your poems? Several of your poems, such as “Blue Moon River Walk,” “Collecting Coal from Railroad Tracks,” “Tracks and Trails,” and others, tell stories or vignettes, as if from your experiences.

I suppose I could write as a persona. I haven't done it yet. I take very few liberties with Truth. If I write about it, it almost certainly happened. In my poetry, anyway. Fiction, not so much.

You make frequent use of enjambment [cutting off a line in mid-sentence] in this poem. Was that a conscious decision on your part to set the atmosphere of the poem or was it something that just came instinctually? How do you shape the poems you write?

Early in, I had no form to my poems. They determined their own shape and form. Then I saw my friend Rodney DeCroo's work. He used four-line stanzas almost exclusively. I found that form was very friendly to my eyes. It increased my concentration when reading a piece. What I'm saying is, I stole it from someone else.

Enjambment: I find it pulls me forward in a piece. It adds a sense of urgency. I like that.

What are the sources of inspiration important to you, either directly artistic or indirectly through other influences?

Ray Bradbury's Something Wicked This Way Comes is so very poetic. His prose wears the finest poetry. My brother David is likely my biggest influence. I'm a year and a half older than he is, but I want to be him when I grow up.

You mentioned Ray Bradbury's Something Wicked This Way Comes as an influential book. Have your explored his writing process as well?

Uncle Ray had the idea that every writer should read a short story, a poem, and an essay every night. He educated himself in libraries that exact way. Stuffed the best material in, harvested what came out. I read as much as possible, but I'm afraid I can't manage it every night.

His plan--it's a bit too disciplined for me. My mind is too flighty for it. I sit under the clouds and snag ideas as they pass by.

Nearby nature seems to play an important role in many of your poems—river walks, the woods, animals and birds. How important is outdoor life to you? Are outdoor walks and hikes an important part of your life and artistic inspiration?

When we were kids, our television broke. Too expensive to fix. I began reading piles and piles of books every week. We grew up in Rachel Carson's home town. Green is a way of life here. I played down by the river, forged paths in the woods, gathered coal on the railroad tracks, climbed every tree daily, dammed streams, rode my bike miles and miles. I took my books along everywhere I went. I read on a pier at the river. I sat in our mulberry tree, reading books and picking berries. Stories and nature always seemed to belong together.

Your poem, “Candyhouse to Gretl” seems like an interesting take on these nature and family themes, combining a sense of the woods with a fairy tale setting (which are often based in nature as well). How did this poem come about?

Young Ravens Literary Review was seeking poems with a new take on fairytales. I have a great fondness for Hansel and Gretl. The candyhouse seemed to have something to say. When I sat rolling over the details of the story, I wondered if the house itself had been enchanted, had been something else. I listened for her story, and she told it.

When did you first start writing poetry? What attracted you to it? Who were your favorite poets when you started out and how has this evolved over time? Do you do any other genre of writing?

I was required to take two writing classes as part of my English degree. I chose poetry thinking I'd get by with some cheap haikus. Ha! I had no clue. The first class passed by, nothing great happened. During the second class, one student's sister was killed in a car accident. Everyone was stunned.

I wanted to write something for her, something REAL, no cliches or cheating. I sat for hours, piles of crumpled mistakes all over the floor. Then it came out: "We rip flowers from the ground to plant people..." It began pouring out, then. I tossed anything I had heard said before. It needed to be fresh, honest, real.

Seems silly, now, that line. But it was the most honest line I could write. And it caused a passion for words that I still carry.

When did you first start publishing poetry? What drove you to take your experience to the public?

Maybe two, three years ago I published for the first time? We started a little poetry group in our town. The guy leading it had just picked up a master's degree in poetry. His enthusiasm was contagious. I was writing daily, on fire. The three of us fed one another and I got just enough confidence to submit somewhere. Published as an Editor's Choice: Time of Singing Magazine. What an ego boost!

What are some experiences that have been formative to you as an artist?

I drink in all the beauty I can find. I found that the more I did that, the more beauty I saw everywhere to celebrate! My poems do tend to be celebrations. I don't think I've ever written a sad one.
What are your poetic goals in the next few years?

I would love to publish a chapbook. My focus is on my fiction these days, though. Look me up! I've had great luck in contests this year. I smile all day long these days.

How long does a poem sit before you send it for publication? How much revision usually goes into it?

Revising is my favorite part of writing! Once the basics are on paper, you get to go back in and edit. Editing is where you string the magic into the piece. Mulling over every image, every word, even. Ahhhh, bliss!

Your brother, David Lovic, is also a talented poet and creative artist. What are your thoughts on encouraging creativity in a family and raising children in a way to spark their natural creativity? Was there any creative or other rivalry growing up? How did the relationship spark each other’s development (if it did)?

There's still a joking rivalry. My brother is my biggest fan, best critic, most steady cheerleader, other than my kids. I have a sweet support system. I've been blessed. So very blessed.