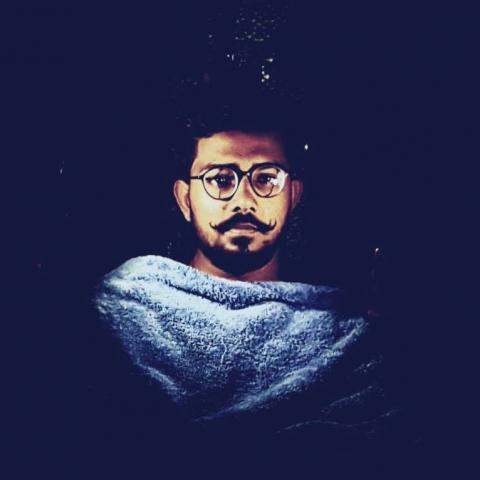 Quite the undiscovered little gem of a flick here.
Donald Pleasence plays psychiatrist Leo Bain, who runs a clinic called The Haven.  Ooh, Pleasence as a shrink -- there's a stretch!  But this is a completely different kind of shrink than his role as Dr. Loomis in the Halloween movies; Leo Bain will go to absurd lengths to avoid calling anyone "ultimate evil."  His philosophy is to get within his patients' (he calls them "voyagers," who just happen to be taking a different voyage from the rest of us) world and work them out, being completely accepting of them.

Even the denizens of the third floor (or, more ominously, The Third Floor).  Guarded with electronic security precautions, these "voyagers" are the violent psychopaths:
Fatty, a serial child molester.

The Bleeder, a serial strangler with the strange quirk that his nose starts bleeding every time he kills someone; he also won't show his face to strangers (including the camera).
The Preacher (Martin Landau), a former clergyman who took delight in setting full churches on fire -- now he screams vengeful Old Testament verses at everyone.

Hawkes (Jack Palance) a career serviceman and 'Nam vet with, well, plenty of issues.
Everything's going as well as can be expected, I suppose, until Dr. Daniel Potter (Dwight Schultz) comes to The Haven to replace a Dr. Merton, who had left for a hospital in Philadelphia.  Hawkes, the ringleader of the psychopaths, takes it into his head that Potter actually killed Merton to take his place, and the four of them stay up at nights plotting a patient revenge.  (Note to psych ward administrators: It's probably a bad idea to take for delusional psychopaths, put them all in one bedroom, and let them have unmonitored conversations at night.)
Somehow Fatty gains access to the office, where he finds an envelope with Potter's address on it, and sees a family picture of Potter's wife and little girl.  (Say it with me:  Ewwww...)  Everything's ready, as soon as they have a chance.

In the meantime, Potter's sister Toni comes to visit.  She's previously had a breakdown, but now she's fine, thank you, she's very urban (back in the days when that didn't mean "African-American"); she even drags Potter and his wife off to a club concert by one of her favorite New Wave groups (she didn't tell Potter until they were there that their name was The Sick F*cks).  While there (with Potter stuffing his ears with napkins), the power goes out. All over town.  A blackout at the nuclear power plant.

And at The Haven, the backup generator fails to kick on.  Our delusional foursome is free (after killing the floor monitor -- who could probably use a break anyway; he apparently worked there 24-7).
Their first stop is the hardware store in town, where looters are running amok.  Each takes his choice of several weapons -- baseball bats, hunting knives, guns, crossbows, hand rakes...  The Bleeder even picks a hockey mask to cover his face.  (Then he bleeds all over it when he carves someone up with the hand rake on the way out.)

By morning, the inmates still aren't accounted for, and the power is still out.  (Can't just change a fuse in them reactors, you know.)  Today is the day they start ruining Potter's life -- beginning with Fatty waiting for the daughter to get home from school...
You can tell when I liked a movie (you can order the best movie review, film essays and research papers in our paper writing service - https://mcessay.com/), because I don't give a full-to-the-end review; I reserve spoilers for movies that sucked from start to finish.  So that's where I'm going to leave it.  It becomes an intense little barricaded-house situation (like Night of the Living Dead but with smarter opponents), with plenty of bodies and a couple of good shocks.